It's amazing how easy communicating thru Internet is. Just as an example yesterday I got a contact from Rick McKinney, an archer myth for myself! This is just the last important and/or famous person I met thru Internet, and in fact in the past I got contact with a lot of important developers (from PostgreSQL to Samba and Linux....).
This is one of the things I like the most about Internet: it does not matter who you are or what you do, you can always and easily meet people you only heard about!
Pubblicato da Luca Ferrari a 13:29 Nessun commento:

In the past few months I developed the prototype of a role system for Java agents that I called WhiteCat, in contrast to RoleX (also known as BlackCat).
The prototype is developed in 100% Java and is based, as its precedessor, on the Javassist bytecode manipulation library. The idea is the same as in RoleX: Java agents should be enhanced thru roles (i.e., Java third party libraries) dynamically at run-time, and must be merged with the role they assume, becoming a single entity with their roles. The aim is thus to support role external visibility, that is the capability to recognize a role played by an agent simply looking at it. Since in Java "looking" at an object and retrieving its class information, the WhiteCat approach must manipulate the agent class structure in order to make the role visible as a part of the agent itself.
For a more detailed explaination of the inspiration behind this role approach please see this article on the IBM Systems Journal.

There are a few drawbacks in the RoleX design that lead me to the design of the WhiteCat approach:

Starting from the above drawbacks I decide to design a new approach with the same base concepts, but faster, simpler and with more role visibility options. The result is the WhiteCat prototype that provides three level of role visibility:

Role visibility is defined thru interfaces and annotations, so that the role loader can recognize how and where to apply changes to the agent (or its proxy).

As an example consider the following application snippet:


As you can see the agent proxy is simply injected with the role. Please note that a role instance is used, not a role class. This means that the role can be instantiated and initialized as you like, and can injected to the agent or its proxy when you want, and of course the role will keep its state.
Just after the injectPublicRole() call, the agent proxy is perceivable (thru instanceof) as implementing the public role interface, that in the above example is the IDatabaseAdministrator one. In order to achieve this, the agent proxy class structure is extended by the role one, meaning that it is like the agent proxy has new subclasses with the role properties. Since the agent proxy class structure is extended (i.e., all the classes up to the agent proxy are not touched), there's no need to discard the "old" object reference. If the developer does not use the new proxy reference (i.e., newproxy in the code above), it will simply not be able to exploit role capabilities, but he will be able to exploit all
original proxy capabilities.
The RoleEngine is a special class loader that performs bytecode manipulation in order to extend the agent proxy class chain. The RoleEngine exploits the Javassist library in order to manipulate the class structure, and appends
to each new class a unique number, so that the same class can be manipulated different times by the same RoleLoader as the result will have a different name and so will not clashes with other already manipulated classes. Moreover the role adoption model is simpler than in RoleX, since the developers will handle roles in straight way: once the injectPublicRole() is called, the developer could
test the agent proxy against the injected role and cast the agent proxy to such role. Last but not least, since WhiteCat does not manipulate a whole inheritance chain, rather it appends a chain to another, the approach is much faster than the RoleX one.

Of course, as shown in the figure, the manipulation process can be repeated as many times as needed (i.e., one for every role assumption). 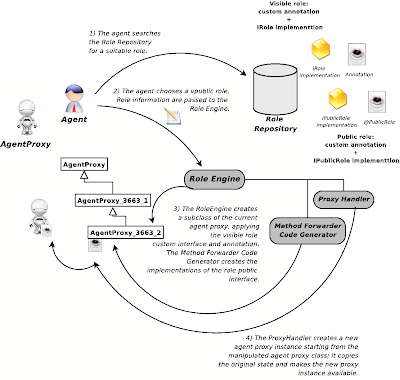 In my opinion WhiteCat represents a very enhanced role approach than RoleX, and even if still a prototype, it is enough stable to be used in role based applications.
I'm still working on WhiteCat, and I will release it under the GNU GPLv3 license. If you are interested in WhiteCat and want to know more details or discuss with me, please e-mail me (fluca1978 at gmail.com) and I will be happy to provide more information.
I'd like to thanks Mr. Shigeru Chiba and the JBoss team and community for their work and support on Javassist.
Pubblicato da Luca Ferrari a 12:49 Nessun commento: